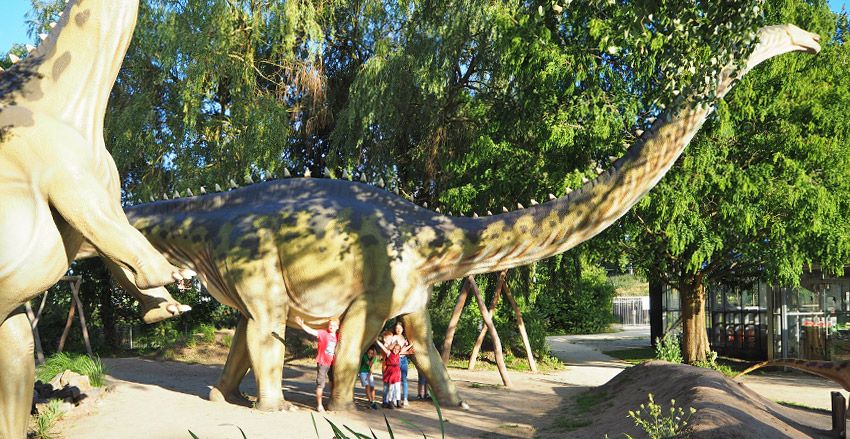 At Dinoland in Zwolle, children can learn, discover and play around the dinos. There are so many things to do indoors and out. Rain needn’t stop play at Dinoland!

Test your knowledge during the Dino exploration trail and discover all the dinosaurs around the park. Dig up a dinosaur skeleton, test your palaeontology skills in the lab, conquer the climbing course, play mini golf and try out the playground! The park is home to more than 100 dinos from the Triassic, Jurassic and Cretaceous periods. Some are small while others can be 15 metres tall! All the dinos feature information about their species, their habitat and the period in which they lived. 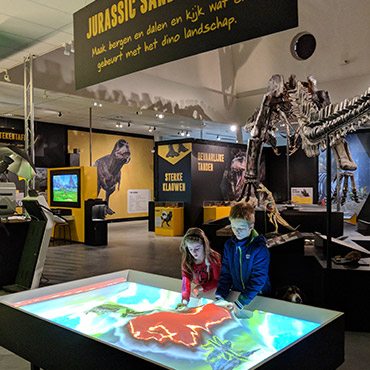 The T-Rexpedition, set up together with Naturalis, teaches you all about the most fearsome dinosaurs that ever walked this earth: the Tyrannosaurus rex. But you can also: 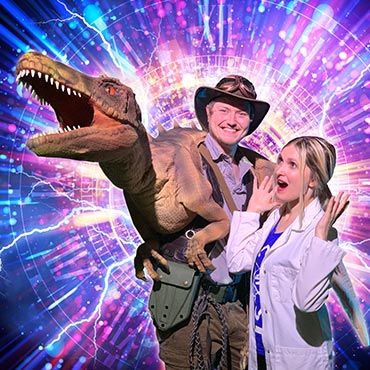 Because of Corona we currently do not have a show inside, but outside. The Ranger and Researcher will introduce you to our dinosaurs in several performances throughout the day. Current show times are indicated in the park. 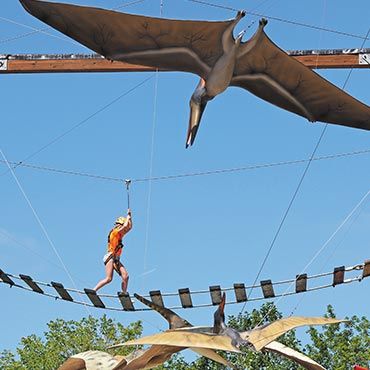 Are you a real daredevil? Then you'll climb straight up our 8 meter climbing course and tower! For these activities, you need to be at least 1.30 m tall and be wearing closed shoes. We'll provide a helmet and safety lines of course. There is a special low level course for smaller children, without the need for safety lines. 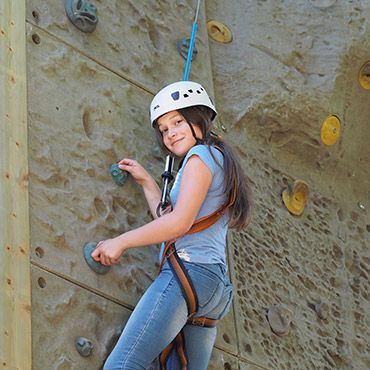 Have you ever climbed on a real climbing wall? It's possible in Dinoland! First you are properly secured and you get a helmet. Then try to climb to the bell at the top of the wall. There is an easy and a difficult job. The climbing wall requires a minimum length of 1.30 meters and closed footwear. 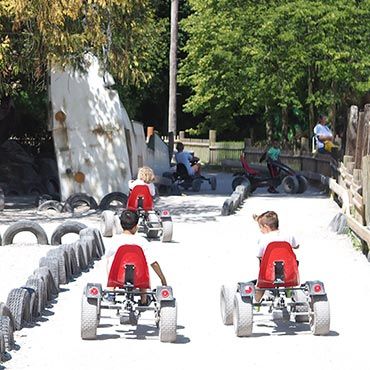 You can make rounds on a go-kart to your heart's content on the Dino Cars go-kart track. Just be careful not to get the Carnotaurus! He's hiding somewhere on the track ... 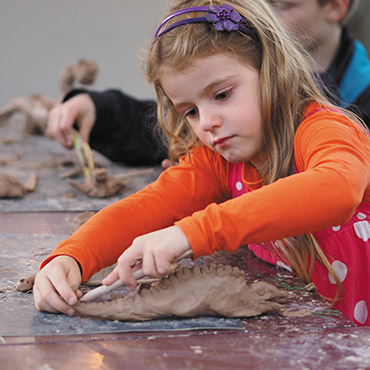 There are all kinds of discovery activities in the paleo lab, such as:

* A surcharge is requested for this activity to cover the costs of materials and keep the price of park entrance tickets low. 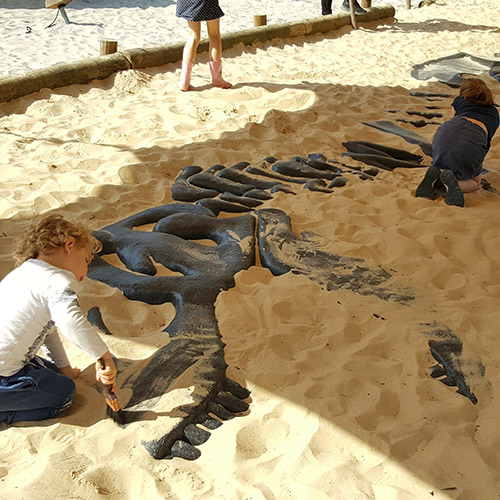 There's a mega T-Rex skeleton hidden under the sand. We could sure use your help unearthing it! 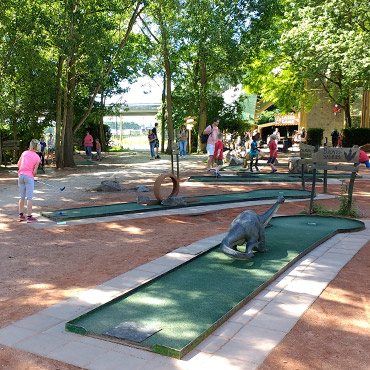 Hit a few balls on the 18 hole mini golf course. It's named after the little Minmi Ankylosaurus. The battle is on for the dinosaur caught in the laser game arena! Take care, you'll be hit before you know it! 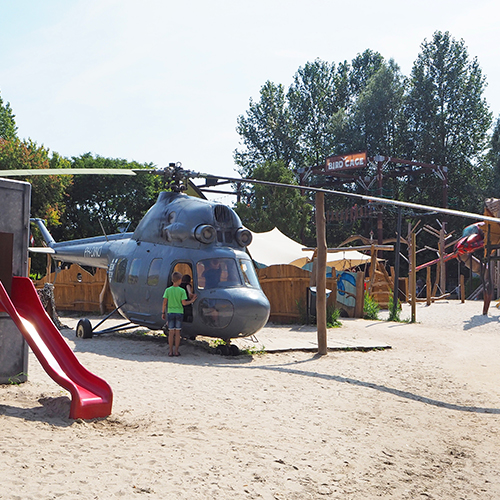 There's so much outdoor fun playing in Dinoland. We have a play hill and various playgrounds (with a plane and helicopter to climb in!) 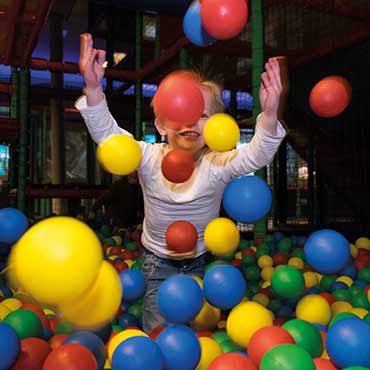 There's plenty of room for fun. Clamber through the playing equipment, roll around the ball pit, slide down the slide and play exciting interactive games. We have a separate play area for toddlers. 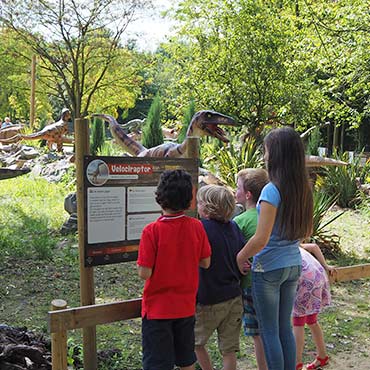 Do you know all about dinosaurs? Test your knowledge on the dino exploration trail. It is free of charge and introduces you to all the dinosaurs in the park. You'll also learn more about the discovery of dinosaurs in the Wild West era. 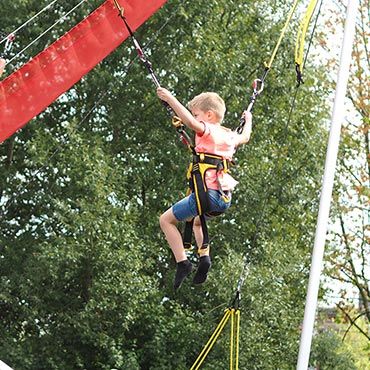 How high can you jump? You can test it yourself on the bungee trampoline. Did you know that some dinosaurs could also jump very high?